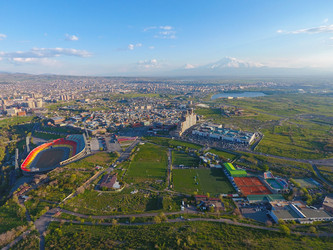 Education in a Changing World: The impact of global realities on the prospects and experiences of educational research
The background to the organisation and hosting of ECER 2022 in Yerevan is one that has been indelibly and fundamentally influenced by the experience of the Covid-19 pandemic. The initial rhetorical, political and social reactions to this profound global challenge paradoxically, although perhaps understandably, emphasised the necessity to engage...
Read more

Yerevan State University was founded in 1919. Nowadays there are several buildings for the approximately 20,000 students who study at the 19 faculties, where 1660 professionals are organizing the educational process now.

Today the main building of the Yerevan State University is situated in the heart of the Capital of Armenia, in the center of Yerevan. The building speaks for itself. The main building is very large and provides many opportunities for students and for the community - it is as long as long-term missions of the university, and as mysterious as human thought. It has very special architectural features.

Yerevan is the capital and largest city of Armenia and one of the world's oldest continuously inhabited cities. Situated along the Hrazdan River, Yerevan is the administrative, cultural, and industrial center of the country. It has been the capital since 1918, the fourteenth in the history of Armenia and the seventh located in or around the Ararat plain. The city also serves as the seat of the Araratian Pontifical Diocese; the largest diocese of the Armenian Apostolic Church and one of the oldest dioceses in the world.

The history of Yerevan dates back to the 8th century BC, with the founding of the fortress of Erebuni in 782 BC by King Argishti I at the western extreme of the Ararat plain. Erebuni was "designed as a great administrative and religious centre, a fully royal capital." By the late ancient Armenian Kingdom, new capital cities were established and Yerevan declined in importance. Under Iranian and Russian rule, it was the center of the Erivan Khanate from 1736 to 1828 and the Erivan Governorate from 1850 to 1917, respectively. After World War I, Yerevan became the capital of the First Republic of Armenia as thousands of survivors of the Armenian Genocide in the Ottoman Empire arrived in the area. The city expanded rapidly during the 20th century as Armenia became part of the Soviet Union. In a few decades, Yerevan was transformed from a provincial town within the Russian Empire to Armenia's principal cultural, artistic, and industrial center, as well as becoming the seat of national government.

With the growth of the Armenian economy, Yerevan has undergone major transformation. Much construction has been done throughout the city since the early 2000s, and retail outlets such as restaurants, shops, and street cafés, which were rare during Soviet times, have multiplied. As of 2011, the population of Yerevan was 1,060,138, just over 35% of Armenia's total population. According to the official estimate of 2016, the current population of the city is 1,073,700. Yerevan was named the 2012 World Book Capital by UNESCO. Yerevan is an associate member of Eurocities.

Yerevan is the capital of free water.  Everywhere around in the city you can find waterworks with drink water or drinking water fountain which is called “Pulpulak” in Armenian language.  So that here you do not need to buy water bottles anymore and spent money on plastic. Everywhere is well hydrated.

And even you can see here in “singing and dancing fountain”.  The famous singing fountains are also situated on Republic Square right next to the History Museum and Art Gallery. Tourists from all over the world come here to admire the attractive, unusual, and attractive views of them. Fountains work every day from late May to October, making gorgeous music. The program of the show includes the world’s classical masterpieces, national music, rock, and pop. The show always ends with the song of Charles Aznavour “Eternal Love”. Both the fountains and their colors change according to the rhythm of the song or music played.

Republic Square is the most crowded part of the city which is called “the heart of Yerevan”, considered one of the most amazing and famous places of the capital. Here is situated the History Museum and Art Gallery, also the building of Government of the Republic of Armenia and historical buildings. The National Gallery of Armenia is the largest art museum in Armenia and shares a building with the History Museum of Armenia. Around Republic Square there are other memorable places. The Opera Theatre is also situated not so far from Republic Square, too. Yerevan Opera Theatre is the main spectacle hall of the Armenian capital. There are many sights around the building such as the swan lake, the statues of world famous composers Aram Khachaturyan and Aleksander Spendiaryan.

One of the most famous works by Ervand Kochar “Sasuntsi David”, who is the hero of the Armenian epic novel, stands in front of the railways station. This station connects the capital of Armenia with its neighboring countries.

The collection of Armenian manuscripts all over the world continues to this day. Every year more and more manuscripts and documents are replenishing Matenadaran collection. To date, Matenadaran Fund has approximately 23,000 of ancient Armenian manuscripts and several thousand manuscripts in Russian, Arabic, Persian and other languages. In addition to manuscripts, Matenadaran is rich in old-printed books, which also represent an artistic value because of the rich decoration up to the precious stones. Thanks to its treasures, Matenadaran has become an important cultural and scientific center of world significance, attracting many specialists from different countries around the world who use its extensive materials for their research. Matenadaran is the national pride of Armenia, a prominent and eloquent witness of the creative thought of the Armenian people.

There are several cafes and restaurants on both sides of the “Cascade” frequented by locals and tourists. Classical and jazz concerts often take place at the Cascade during spring, summer, and early autumn, with spectators sitting on the steps. Cascade Yerevan is the beating heart of the city. It is where the youth gather for drinks, it is where all open-air concerts are held, it is where you can capture the best panorama of Yerevan. Cascade’s benefits are probably countless. Due to art collector Gerard Cafesjians’s investments and connections, near the Cascad was founded Cafesjian Center for the Arts and Cascade has become a valuable open-air and free-access modern art museum. Artists like Fernando Botero (Colombian sculptor), Lynn Chadwick (British sculptor, one of the giants of 20th century art), Barry Flanagan (Welsh sculptor), Stanislav Libensky and Jaroslava Brychtova (Czech couple), Paul Cox (English sculptor), Jaume Plensa (Spanish Catalan artist and sculptor) are featured at Cascade, and all passers-by have a chance to enjoy their masterpieces for free, just during your morning or evening walk. Cascade has been everyone’s all-time favorite not only because of these high-end valuable artworks, but because of the fantastic view on Yerevan that one can enjoy from the top of Cascade, with Mount Ararat standing behind Yerevan’s iconic pink buildings.